Purslane (Portulaca oleracea), also called little hogweed or pursley, is a powerhouse herb. The plant may be eaten as a vegetable. It has a slightly sour and salty taste and is used in salads and soups as a potherb in different countries.

Purslane is actually an incredibly nutritious vegetable that is valued in Asia and Europe both as a culinary herb and as a medicinal one. It comes from India, where it was a food crop centuries ago. It now grows wild all across America. It has smooth, reddish, mostly prostrate stems and the leaves, which may be alternate or opposite, are clustered at stem joints and ends.

All parts of purslane are edible, raw or cooked. The seeds can be eaten raw or used to make flour. This herb is generally considered a weed, which bodes well for foragers. It’s a potent source of omega-3 fatty acids, maybe the most potent of all land plants. The reddish stems and the yellow flowers and yellowish leaves are indicative of betacyanins and betaxanthins, both antimutagenic (that means they fight cell changes, or cancer).

Raw purslane is 93% water, 3.4% carbohydrates, 2% protein, and contains negligible fat. Purslane is a good source of vitamins E and C. It is also a rich source of alpha-linolenic acid, an essential omega-3 fatty acid. 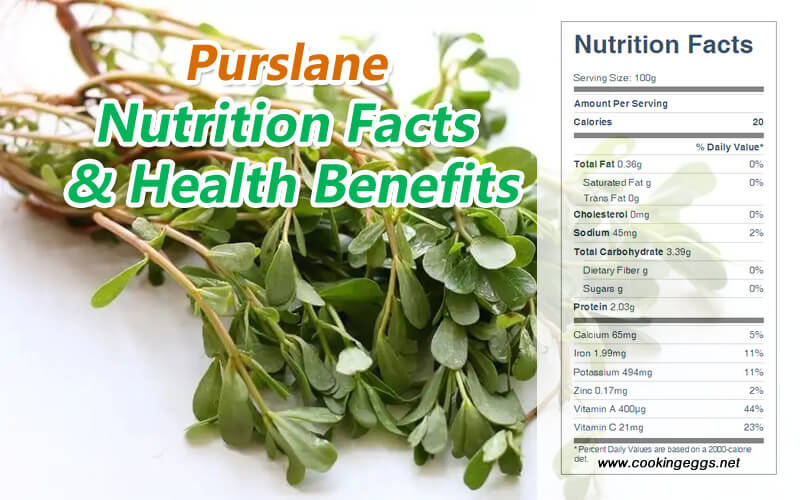 The real claim to fame of purslane as a health food is that its omega-3 concentration is the highest of any green leafy vegetable, the same omega-3 found in flaxseed. Purslane also contains small amounts of the longer-chain omega-3s (DHA and EPA), which are rarely found in anything but fish and fish oil. Omega-3 fatty acids are anti-inflammatory, heart-healthy fats that have been found beneficial for hypertension, type 2 diabetes, coronary heart disease, and depression. Purslane possesses a wide spectrum of pharmacological properties such as neuroprotective, antimicrobial, antidiabetic, antioxidant, anti-inflammatory, antiulcerogenic, and anticancer activities.

Anti-inflammatory Effect of Purslane
Omega−3 fatty acids are anti-inflammatory. Since inflammation is a critical component of virtually every degenerative disease, from heart disease to diabetes to obesity to Alzheimer’s, and since inflammation itself has been dubbed “The Silent Killer,” anti-inflammatory foods and supplements are of critical importance to our health. Omega−3 fatty acids also support circulation. They transport oxygen from red blood cells to the tissues. They prevent blood cells from clumping together (remember, blood clots can be a cause of heart attack and stroke). They act as blood thinners, much like aspirin, only without the side effects. And they’re also very effective for diabetics in improving insulin and glucose metabolism.

Antioxidant Effect of Purslane
Purslane contains high levels of antioxidant vitamins: vitamin E (α-Tocopherol), vitamin C, vitamin A (beta carotene ) and glutathione. They have antioxidant activity, so this plant may inhibit lipid peroxidation by scavenging free radicals and increasing the intracellular concentration of glutathione, and thereby decrease oxidized LDL and improve insulin receptor activity. Because they are important in maintaining health, the American Heart Association therefore recommends the consumption of foods rich in antioxidant vitamins and other nutrients.

Lowering Blood Pressure and Cholesterol
Purslane is rich in omega-3 fatty acids and is therefore helpful in protecting the heart and lowering blood pressure and cholesterol levels. Evidence suggests that omega−3 fatty acids modestly lower blood pressure (systolic and diastolic) in people with hypertension and in people with normal blood pressure. They also reduce blood triglyceride levels. Purslane is one of the vegetable crops eaten extensively in soups and salads in Greece, the Greek Islands, Lebanon, and other Mediterranean countries, where the incidence of both heart disease and cancer is low.

Treatment of Diabetes
It is a well-known medicinal plant for diabetes in several countries, including China, Africa, Greece, Turkey, and Mexico. There are several preclinical studies on the hypoglycemic activity of purslane, its plausible mechanisms of action, and even its effect on diabetes complications like oxidative stress, neurobehavioral dysfunction, nephropathy, and vascular complications of diabetes. It can increase pancreas beta cell mass, improve insulin resistance and insulin sensitivity index, improve the metabolism of lipids, and modulate glucose metabolism.

Purslane seeds were found to be effective and safe as adjuvants or as beneficial alternative therapies for type 2 diabetic subjects. Purslane seeds’ effects as stronger hypoglycemic, insulin resistance reducers, hypolipidemic, hypocholesterolemic, hepatoprotective, and weight-reducing herbs may be due to their polyunsaturated fatty acids, glutathione, flavonoids, polysaccharides, glutathione, antioxidants, and vitamins.

Antimicrobial Effect of Purslane
Purslane possesses antibacterial, antifungal, and antiviral activities as revealed by its antifungal effect against dermatophytes of the genus Trichophyton. A pectic polysaccharide isolated from the aerial part of this plant displays antiherpes property against simplex virus type 2, which is due to the inhibition of virus penetration and not virus adsorption. A 70% methyl alcohol extract of Portulaca oleracea shows antibacterial activity against the Gram-negative stains: Escherichia coli, Pseudomonas aeruginosa, and Neisseria gonorrhea, and the Gram-positive strains: Staphylococcus aureus, Bacillus subtilis, and Streptococcus faecalis, as well as antifungal activity against Candida albicans.

Other Medicinal Uses of Purslane