Green tea is an unfermented tea that is made from Camellia sinensis leaves and buds. In the world, tea is the second most consumed beverage after water, and green tea is the fourth most commonly used dietary supplement in the United States. Green tea has attracted significant attention for its health benefits for a variety of disorders, ranging from cancer to weight loss.

Which tea is best? While it used to be thought that green tea was the standout in promoting health, we now know that both green and black tea have similar, distinct, and, in some cases, overlapping biochemical, physiological, and epidemiological effects. While green tea has received the lion’s share of the attention regarding health benefits, in fact, all true teas are beneficial.

All tea comes from the same plant species, Camellia sinensis. There are three types of tea: green, black, and oolong. The differences are in the way the leaves are processed after harvesting. Immediately steaming green tea leaves prevents fermentation; this destroys the enzymes responsible for breaking down the color pigments in the leaves so they retain their green color. As the fermentation process continues to form oolong or black tea, the polyphenol compounds change. Green tea is lightly processed and favored in East Asia. Black tea is favored in Europe and the West. Black tea is made of leaves that have been left to ferment following harvesting. This fermentation darkens the leaves and allows them to develop a stronger flavor. Oolong tea, popular in China and Taiwan, is partially fermented. 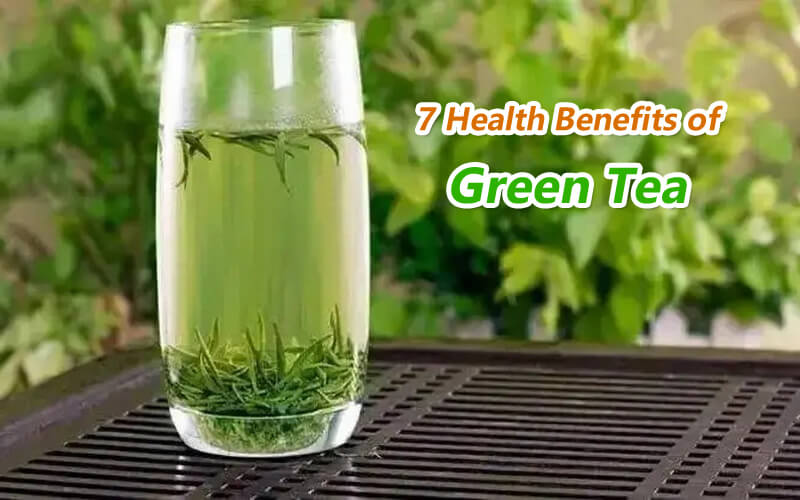 Green tea and its constituent catechins are best known for their antioxidant properties, which has led to their evaluation in a number of diseases associated with reactive oxygen species(ROS), such as cancer and cardiovascular and neurodegenerative diseases. These health benefits include antioxidant, anti-diabetic, neuroprotective, and anti-cancer effects. Several epidemiological studies as well as studies in animal models have shown that green tea can afford protection against various cancers such as those of the skin, breast, prostate, and lung. In addition to the cancer chemopreventive properties, green tea and EGCG have been shown to be anti-angiogenic and anti-mutagenic. Green tea has also been shown to be hypocholesterolemic and to prevent the development of atherosclerotic plaques. Among age-associated pathologies and neurodegenerative diseases, green tea has been shown to afford significant protection against Parkinson’s disease, Alzheimer’s disease, and ischemic damage. Green tea has also shown anti-diabetic effects in animal models of insulin resistance and has been shown to promote energy expenditure. Other health benefits attributed to green tea include antibacterial, anti-HIV, anti-aging, and anti-inflammatory activity.

What is EGCG ? Epigallocatechin gallate (EGCG), also known as epigallocatechin-3-gallate, is the ester of epigallocatechin and gallic acid, and is a type of catechin in tea. EGCG is a polyphenol and has the potential to affect human health and disease. EGCG is used in many dietary supplements.

The most potent polyphenol in tea is a substance known as epigallocatechin gallate, or EGCG, which belongs to a group of flavonoid phytochemicals known as catechins. In one laboratory test, the EGCG in green tea was found to be twenty times more potent as an antioxidant than vitamin C. Many of the health benefits associated with the consumption of green tea are attributed to EGCG.

Antioxidant Activity The health benefits of green tea are mainly attributed to its antioxidant properties. Tea contains more than four thousand chemical compounds. The ones that have drawn the most attention include the phytonutrient polyphenols called flavonoids—the same type that is found in red wine and berries. Green tea contains four major flavonoids, the most active and well-known of which is epigallocatechin gallate (EGCG), which has been shown to be a more effective antioxidant than vitamins C and E.One cup of brewed green tea provides more than five times the flavonoids of a red onion.

Green tea also improves glutathione, a tripeptide that consists of three amino acids (cysteine, glycine, and glutamic acid) and is found in high concentrations in many bodily tissues. Glutathione is an important antioxidant that supports detoxification. Glutathione deficiency has been linked to several chronic diseases, and green tea has been found to increase it. These are the sources of the antioxidant power of green tea.

Tea and Cancer There is evidence that tea consumption decreases the risk of stomach, prostate, breast, pancreatic, colorectal, esophageal, bladder, and lung cancers. Laboratory studies have consistently shown that tea can inhibit the formation and growth of tumors. Researchers have demonstrated that the catechins in tea prevent cell mutation and deactivate various carcinogens. They also inhibit the growth of cancer cells and the growth of the blood vessels that tumors need in order to grow. In one Japanese study, researchers showed that women who drank the most green tea—in some cases, as much as ten cups daily—had a lower risk of developing cancer when compared to women who did not drink tea. There is also a belief among some researchers that the prostate-cancer incidence in U.S. males is fifteen times higher than the incidence in Asian males, in part because of the considerably greater amounts of tea drunk by Asians. While even one cup of tea seems to provide health benefits, it may take as many as four cups daily to really achieve a major decrease in cancer risk.

Anti-inflammatory Effect Green tea has anti-inflammatory properties due to its containing catechins that are polyphenolic compounds, and epigallocatechin-3 gallate is the abundant catechin in green tea. EGCG inhibits IL-1-induced proteoglycan release and type 2 collagen degradation in cartilage explants. In human in vitro models, it also suppresses IL-1β and attenuates activation of the transcription factor NF-κB. Green tea also inhibits the aggrecanases, which degrade cartilage. Research now demonstrates both antiinflammatory and chondroprotective effects. Its use in the treatment of arthritic disease as an antiinflammatory agent has been recognized more recently.

Cardiovascular DiseaseGreen tea has long been recognized to have cardiovascular and cancer preventative characteristics due to its antioxidant properties. The major polyphenols in green tea are flavonoids, and they are responsible for the antioxidant and other health benefits of tea. It seems that flavonoids slow or even halt the oxidation process that allows cholesterol to harden and build on artery walls. In this way, flavonoids have the ability to lower cholesterol and reduce the incidence of heart disease. Tea also seems to play a role in keeping the lining of the blood vessels plaque free, which in turn lessens the risk of coronary artery disease. Another study found that in males, deaths from coronary artery disease were reduced by 40% among those who drank one or more cups of tea daily, and another study from Harvard showed that there was a 44% lower risk of heart attack in people who drank at least one cup of tea daily.

Anti-hyperlipidemia All types of tea are rich in various flavonoids. Catechins are the main flavonoids in green tea, whereas black tea mainly contains condensed flavonoids, such as theaflavins and thearubigins. Tea and tea-derived flavonoids have been demonstrated to have a hypocholesterolemic effect. Tea flavonoids can enhance nitric oxide status and improve endothelial function, which could at least partly be responsible for the benefits of tea on cardiovascular health. RCTs showed that drinking green tea or taking green tea supplements decreases the blood concentration of total cholesterol and LDL cholesterol and does not affect the concentration of HDL cholesterol or triglycerides.

Neuroprotective Oxidative stress is believed to be a major contributor to the pathogenesis of Parkinson’s disease, especially the death of dopaminergic neurons. Recently, misregulated iron metabolism in the brain has been shown to be involved in the generation of the pathological Lewy bodies in Parkinson’s disease through iron-induced aggregation of alpha-synuclein. Various studies have shown that green tea and EGCG significantly prevent these pathologies in animal models. Epidemiological studies suggest that caffeine may provide protection from the development of Parkinson’s disease. There is preliminary evidence that the caffeine from long-term tea consumption provides a small amount of protection against the progression of dementia or Alzheimer’s disease during aging.

Gastrointestinal Health
The flavonoids in green tea have been shown to have a positive effect on gut health. Green tea also impacts the bacteria in the gut by increasing the number of the good bacteria lactobacilli and bifidobacteria and decreasing the number of the bad bacteria bacteroides, clostridia, and enterobacteria. In addition, it increases the production of short-chain fatty acids (SCFAs) that feed our good bacteria. It also seems that teas may possess a probiotic effect that enhances gastrointestinal health.