As a food item, onion can be cooked alone as a vegetable, or part of a savoury dish, but can also be eaten raw. They are pungent when chopped and contain certain chemical substances which may irritate the eyes. Onions are not always a favorite among people, but knowing their health-promoting benefits may change their minds.

The nutritional value of onions

Onions are about 89% water, 9% carbohydrates (including 4% sugar and 2% dietary fibre), 1% protein, and negligible fat.

Onions contain low amounts of essential nutrients and have an energy value of 40 kcal in a 100 g amount. Onions contribute a savoury flavor to dishes without contributing significantly to their caloric content. Onions are a very good source of vitamin C and chromium, and they also provide manganese, molybdenum, vitamin B6, folate, potassium, phosphorus, and copper. 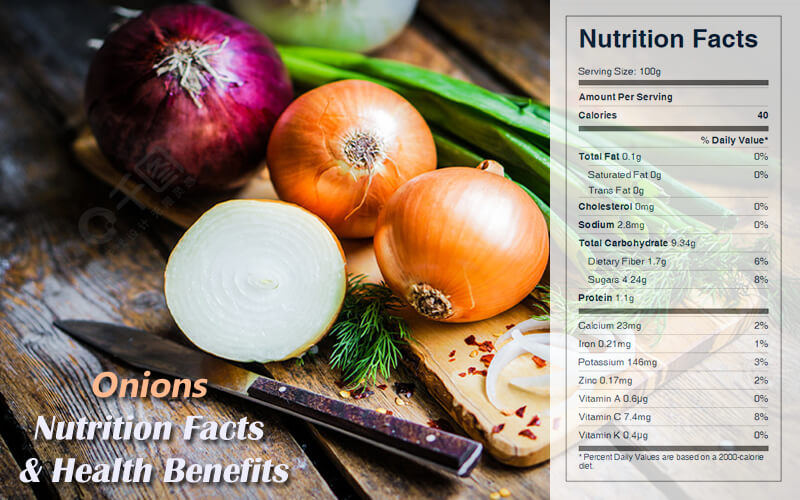 The health-promoting properties of the onion rely heavily on its immune-modulating, anti-inflammatory, and antioxidant effects.

As we know, rich fatty food pushed up blood cholesterol levels, and onions, whether cooked or raw, pulled it right back down, eating half an raw onion daily can raise blood levels of beneficial high-density lipoproteins by an average of 30%.

Onions, like leeks, garlic, and shallots, are members of the Allium family, a group of plants with a characteristic taste caused by sulfur compounds that also have some powerful benefits for human health. These sulfur compounds are being investigated for their anti-inflammatory, antioxidant, cholesterol-lowering, and cancer-fighting potential. Eating onions and other allium vegetables regularly is associated with a lower incidence of several types of cancers. The sulfur compounds are also known to help lower blood pressure and prevent plaque formation in blood vessels, and the B6 they provide helps reduce homocysteine levels in the blood. Onions do a lot to help preserve cardiovascular health!

The chromium in onions is essential to the proper metabolism of sugar, and people at risk for diabetes may benefit from its glucose-regulating properties. Another sulfur compound in onions that’s come under study more recently may help prevent the absorption of bone, reducing the risk of osteoporosis. Tests have suggested that the more pungent the onion, the more phenols and flavonoids it has—and the more likely it is to have a positive effect on your health.

Onions belong to the same botanical family as garlic, onions have a protective action on the circulatory system that is fascinating cardiologists the world over. In a delightful trial carried out in Newcastle, England, 22 volunteers were first asked to fast and then fed fried fatty British breakfasts, starring bacon and eggs. Half the volunteers had a little extra something on the menu: a helping of fried onions. When post-breakfast blood samples from both sets of volunteers were analyzed, they showed a startling difference. In people who ate the fried feasts without onions, the blood samples showed an increased tendency to clot—a state that could eventually lead to life-threatening thrombosis. The blood of the onion-eaters, however—despite all the bacon and eggs—showed a reduced tendency to clot.

Many of the onion’s traditional properties are now being confirmed by modern research. In studies with rabbits, subcutaneous injections of onion extract lowered blood sugar levels more slowly than insulin, but for a longer period. It is thought this action is due to the glucokinine in onions. In other trials, onions were found to be effective against asthma.

The primary flavonoid found in dry onion skin is quercetin. More than 80 percent of the total content of flavonoids is in the outer scales, which is due to the exposure to sunlight that the inner scales don’t get. A study found that onion peel hot water extract suppressed the production of proinflammatory cytokines IL-6, TNF-alpha, and IL-1 beta.

Thiosulfinates found in onions inhibit the production of arachidonic acid, which results in decreased inflammation from prostaglandins and leukotrienes. The high quercetin content also contributes to its anti-inflammatory properties. Quercetin works to suppress NF-kB—the main inflammatory pathway. Immunomodulation is the mechanism by which the immune response is moderating using an outside compound (the onion). These plant compounds have a direct role in the inflammatory cytokines that modulate the immune response.

The compounds in onions have unique properties in that they can help balance the TH1/TH2 response, it is directly affects the development of autoimmune disease. With all that being said, onions play a significant role in disorders related to aging, inflammation, and antioxidant abilities.