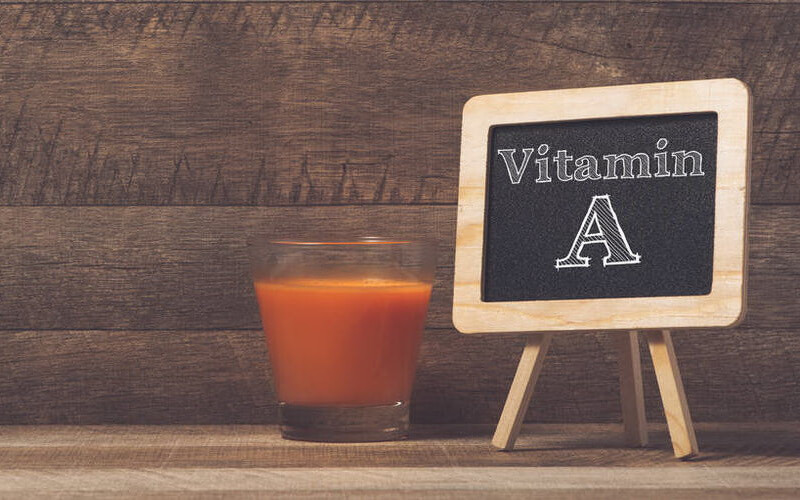 What is Vitamin A ?

Vitamin A was the first vitamin to be discovered and is a fat-soluble vitamin and an essential nutrient for humans. Vitamin A is a versatile vitamin, with roles in gene expression, teeth, vision, skin health, immunity system, and reproduction and growth, and is a powerful antioxidant against heart disease and cancer. Vitamin A is stored in the liver and is not able to be made in the body and must be obtained through diet or supplementation. Vitamin A in the diet comes from both animal and plant sources, such as liver, fish, egg yolks, dairy products, and some fruits and vegetables.

Three Forms of Vitamin A

In the body, vitamin A appears in three chemical forms: retinol (the alcohol form), retinal (the aldehyde form), and retinoic acid (the acid form). Together  these compounds are referred to as retinoids. They each have a specific task in the body.

Retinol:  Retinol is often called vitamin A1, and is one of the most active, or usable, forms of vitamin A. Retinol is found in animal foods and can be converted to retinal and retinoic acid in the body. Retinol supports reproduction and is the major transport and storage form of the vitamin. As a supplement, Retinol is available as a generic medication and over the counter. It is used to treat and prevent vitamin A deficiency, especially that which results in xerophthalmia.

Retinal:  It also known as retinaldehyde, is made from both forms of Vitamin A, both from plants and animal products. Humans ingest retinal directly from meat, or produce retinal from carotenoids and β-cryptoxanthin. Retinal is active in vision and is also an intermediate in the conversion of retinol to retinoic acid. Retinol and retinoic acid may both be produced from retinal.

Retinoic Acid:  It is is a metabolite of vitamin A1 that is a mediating function of vitamin A1 required for growth and development. Retinoic acid can be made from retinol or retinal. Retinoic acid acts like a hormone, regulating cell differentiation, growth, and embryonic development. It is also used in the formation of bones, teeth, and skin health. It is very important for the early development of the embryo, ensuring proper placement of the head and body. Cancer treatments and acne medications typically use this form of Vitamin A. 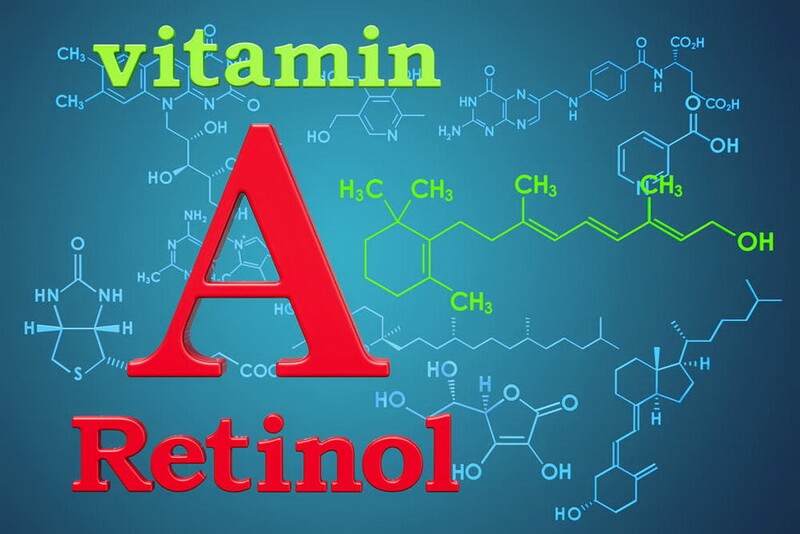 Top 10 Health Benefits of Vitamin A

Vitamin A plays two indispensable roles in the eyes :
It is essential for the health of the cornea, the clear membrane covering the eye. Without enough vitamin A, the cornea becomes hard and thickens, and this can lead to xerophthalmia and even blindness.
Vitamin A is also necessary for healthy cells in other parts of the eye, such as the retina. The retina of the eye requires vitamin A to convert into retina; if vitamin A levels are low, the retina cannot be replaced, resulting in night blindness.

Vitamin A helps regulate the immune system. The immune system helps prevent or fight off infections by making white blood cells that destroy harmful bacteria and viruses. When vitamin A is deficient, immune function is impaired and the risk of illness and infection due to defective epithelial tissue barriers is increased. Much research supports the need for vitamin A in the regulation of the genes involved in immunity. Without sufficient vitamin A, these genetic interactions produce an altered response to infection that weakens the body’s defenses.

Vitamin A is crucial to normal reproduction because of it is involved in directing cells to form the shapes and patterns needed for a fully developed organism. In men, vitamin A participates in sperm development, and in women, vitamin A promotes normal fetal growth and development. During pregnancy, vitamin A is transferred to the fetus and is essential to the development of the nervous system, lungs, heart, kidneys, skeleton, eyes, and ears.

Vitamin A exerts considerable influence on body functions through its regulation of the activities of the genes. Genes direct the synthesis of proteins, including enzymes, and enzymes perform the metabolic work of the tissues. Hence, factors that influence gene expression also affect the metabolic activities of the tissues and the health of the body. Hundreds of genes have been suggested as regulatory targets of the retinoic acid form of vitamin A, and it acts as a hormone to control the expression of genes in the body.

Vitamin A plays a role in bone growth and formation, tooth development, cartilage and collagen synthesis. Topical Retinol has been shown to increase collagen production in aged skin as well as skin damaged by the sun.

Much more vitamin A is in the skin and the linings of organs, where it works behind the scenes at the genetic level to promote protein synthesis and cell differentiation. The process of cell differentiation allows each type of cell to mature so that it is capable of performing a specific function. The retinoic acid form of vitamin A maintains skin health by turning immature skin cells into mature skin cells. Retinoic acid can reduce the size of pores and the amount of sebum that pores excrete.

Much of the β-carotene from the diet is converted into retinoids and provides vitamin A function. Some unconverted carotenoids also reach the blood and tissues, where they may function as antioxidants. It protects cells from damage caused by free radicals. Research has identified links between free-radical oxidative damage and the development of many other diseases, including age-related blindness, Alzheimer’s disease, arthritis, cataracts, diabetes, and kidney disease.

Carotenoids may play a role in preventing cardiovascular disease in people at high risk, possibly linked to carotenoids’ antioxidant capability. Until definitive studies are complete, many scientists recommend that we increase our intake of carotenoids and other nutrients and compounds by consuming at least 5 servings of fruits and vegetables per day as part of an effort to reduce the risk of cardiovascular disease.

Most forms of cancer arise from cells influenced by vitamin A. Coupled with its ability to aid immune system activity, vitamin A may be a valuable tool in the fight against cancer. This is especially true for skin, lung, bladder, and breast cancers. Still, because of the potential for toxicity, unsupervised use of megadose vitamin A supplements to reduce cancer risk is not advised. 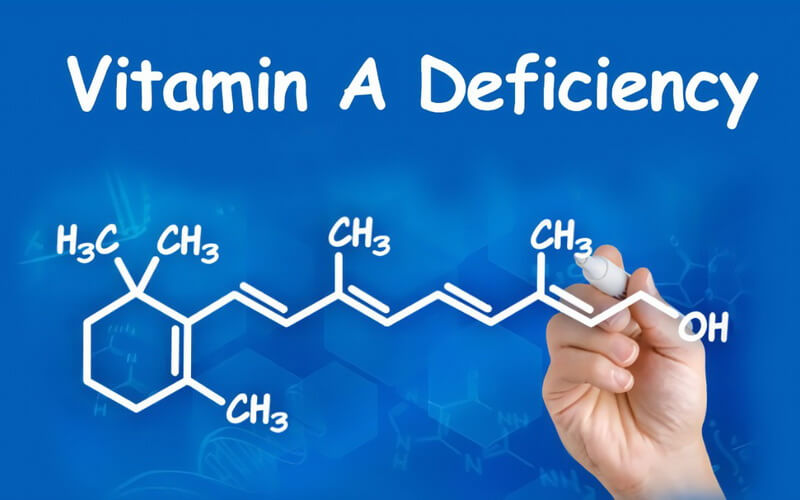 Symptoms Of Vitamin A Deficiency

Night blindness, also called nyctalopia, is a condition caused by insufficient vitamin A in which it takes longer to adjust to dim lights after seeing a bright light at night. Night blindness is the first ocular symptom to be observed with vitamin A deficiency, and it responds rapidly to treatment with vitamin A.

If vitamin A deficiency progresses, the cells that line the cornea of the eye also lose their ability to produce mucus. The eye then becomes dry. Eventually, when dirt particles scratch the dry surface of the eye, bacteria infect it. The infection soon spreads to the entire surface of the eye and leads to blindness. This disease process is called xerophthalmia, which means dry eye.

The World Health Organization classified various stages of xerophthalmia to include night blindness, conjunctival xerosis, Bitot’s spots, corneal xerosis, corneal ulceration, and scarring. This is an abnormal dryness of the eyeball that is characterized by conjunctivitis, an inflammation or infection of the membrane that lines the eyelids. It’s all related to vitamin A deficiency.

All body surfaces, both inside and out, maintain their integrity with the help of vitamin A. Because of the role of vitamin A in maintaining the structural integrity of epithelial cells, insufficient vitamin A may also lead to keratinization. Cell differentiation and maturation are impaired, and the epithelial cells flatten and begin to produce keratin. An accumulation of keratin makes a lump around each hair follicle. The cells of the skin harden and flatten, making it dry, rough, scaly, and hard.

Vitamin A deficiency has been associated with a reduction in lymphocyte numbers, natural killer cells, and antigen-specific immunoglobulin responses. A decrease in leukocytes and lymphoid organ weights, impaired T cell function, and decreased resistance to immunogenic tumors have been observed with inadequate vitamin A intake.

Vitamin A deficiency also diminishes the ability to fight infections. A higher risk of respiratory infection and diarrhea has been reported among children with mild to moderate vitamin A deficiency. In countries where children are not immunized, infectious diseases such as measles have higher fatality rates. Even mild deficiency can also be a problem, as it may increase children’s risk of developing respiratory and diarrheal infections, decrease growth rate, slow bone development, and decrease the likelihood of survival from serious illness.

In the mouth, a vitamin A deficiency results in the drying and hardening of the salivary glands, making them susceptible to infection. Secretions of mucus in the stomach and intestines are reduced, hindering normal digestion and the absorption of nutrients. Other mucous membranes may also be infected, such as mouth ulcers.

Vitamin A’s role in maintaining the body’s defensive barriers may partially explain the relationship between vitamin A deficiency and susceptibility to infection. In developing countries around the world, measles is a devastating infectious disease, killing 450 children each day. Deaths are usually due to related infections such as pneumonia and severe diarrhea. Providing large doses of vitamin A reduces the risk of dying from these infections. Vitamin A supplementation has been shown to reduce the risk of mortality among young children, infants, and pregnant and postpartum women. The WHO recommends broad-based prophylaxis in vitamin A-deficient populations. It also recommends treating children who suffer from xerophthalmia, measles, prolonged diarrhea, wasting malnutrition, and other acute infections with vitamin A. Furthermore, the American Academy of Pediatrics recommends vitamin A supplementation for children in the United States who are hospitalized with measles. 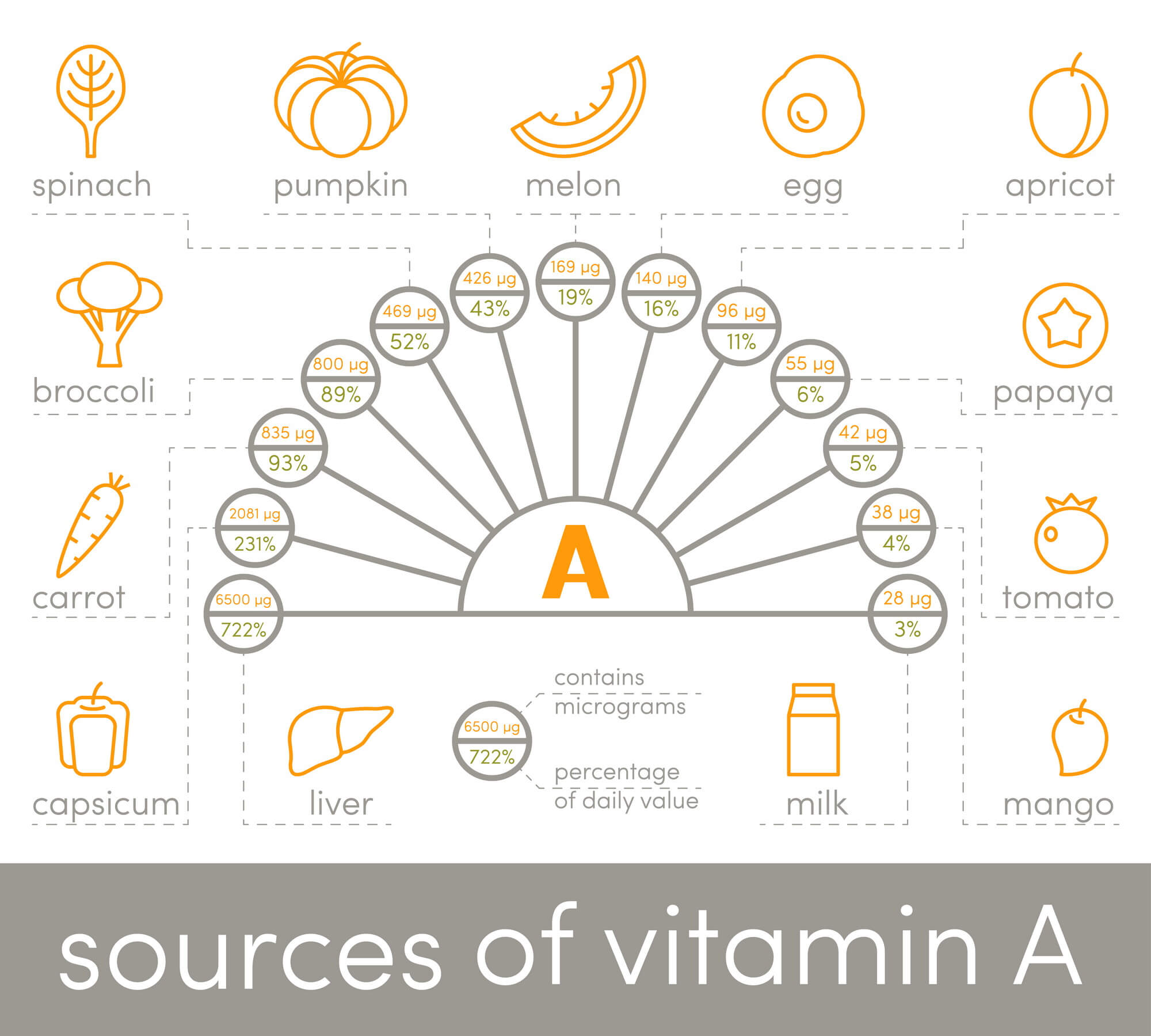 Best Food Sources Of Vitamin A

Pro-vitamin A (beta-carotene) – obtained from fruits and vegetables

Side Effects And Toxicity Of Vitamin A

Prolonged ingesting too much preformed vitamin A (the tolerable upper intake level is 3000 micrograms/day) can cause vitamin A toxic effects, also known as hypervitaminosis A. Symptoms may include nervous system effects, liver abnormalities, fatigue, muscle weakness, bone and skin changes, and others. The adverse effects of both acute and chronic toxicity are reversed after consumption of high-dose supplements is stopped.

Too much vitamin A poses a teratogenic risk, particularly dangerous for pregnant women. Excessive vitamin A during pregnancy can injure the spinal cord of the developing fetus, increasing the risk of birth defects such as malformations of the eyes, skull, lungs, and heart. Derivates of vitamin A that are used to treat acne should never be used by pregnant women.

Chronic vitamin A toxicity may produce severe liver damage, as shown by chronic liver disease with severe fibrosis, liver cirrhosis, marked hyperplasia of hepatic stellate cells, and other liver diseases. It can accumulate over time and potentially become toxic, leading to liver failure.

Excessive amounts of vitamin A may weaken the bones and contribute to fractures and osteoporosis. Retinoic acid suppresses osteoblast activity and stimulates osteoclast formation in vitro, resulting in increased bone resorption and decreased bone formation, such as bone loss that potentially leads to osteoporosis, spontaneous bone fractures, and altered skeletal development in children.

Beta-carotene from plant foods is not converted to the active form of vitamin A rapidly enough to be hazardous. However, too much β-carotene, after it is converted to vitamin A, can build up in fat tissue and cause the skin to turn orange, a condition called carotenosis. To reduce the risk of toxicity, most supplements provide vitamin A as carotenoids.

• Symptoms of vitamin A toxic effects may include: