Jicama is a relative of the potato family. It is a popular dietary staple in Latin America and is widely grown in Mexico and Central America. There are many names for Jicama, including: the Mexican turnip, Mexican yam bean, Mexican potato, Chinese potato, and sweet turnip.

Jicama is a tuber that shares benefits similar to those of other root vegetables. What makes it especially interesting is the dietary fiber. Jicama is rich in beta-carotene, B-complex vitamins, vitamin C, calcium, iron, and potassium. Here are the health benefits of jicama. 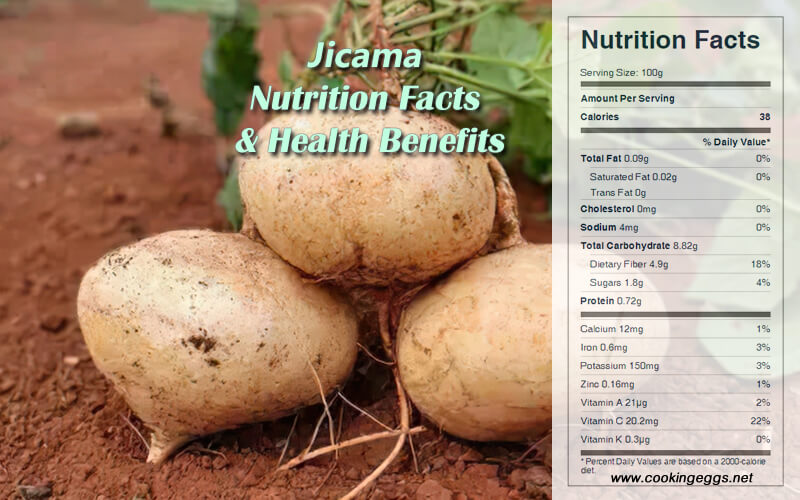 The Nutritional Value of Jicama

Raw jicama is 90% water, 9% carbohydrates, 1% protein, and contains negligible fat. Jicama is a very versatile vegetable that contains a high amount of vitamin C, is low in sodium, and has no fat. Jicama has a flavor similar to that of water chestnut, and many restaurants use it as a less expensive substitute.

Jicama is a good source of dietary fiber, potassium, and vitamin C. It also contains inulin, which is partly responsible for its sweet taste. In addition, inulin increases the absorption of calcium and possibly magnesium. Combined with the fiber and water found in jicama, these nutrients help both hydration and blood pressure. Although it is a sweet-tasting source of fiber, it does not appear to raise blood sugar or triglyceride levels.

Fiber in jicama has an immunomodulatory effect in addition to its ability to improve glucose tolerance, sustain fat content, and mitigate excessive body weight gain. This means that increasing fiber not only benefits your immune system but also helps control sugar and weight gain.

Jicama contains both soluble and insoluble fibers. Eating jicama was found in animal studies to reduce blood sugar and hemoglobin A1C levels, which indicates the amount of sugar in the blood over three months. Another study found it can increase insulin sensitivity, thus signaling an increase in glucose uptake by the cells. Essentially, it helps remove sugar from the blood, a key attribute needed in our diabetic population.

The nondigestible carbohydrates in jicama directly affect the immune system. Nondigestible fibers (insoluble) such as inulin and lignin have a direct beneficial effect on the gastrointestinal tract, specifically helping the GALT. The fiber found in jicama was found to produce IL-4, IL-6, TNF-alpha, and IFN-kappa, and activate cytokine production by B cells and T cells.

In addition, the prebiotics found in jicama stimulate the growth of good bacteria in the colon, thereby having a positive effect on our immune and gut health. And these fibers increased the production of IgA antibodies, which is the most important antibody in the intestinal immune response.

The Jicama root’s exterior is yellow and papery, while its inside is creamy white with a crisp texture that resembles raw potato or pear. The flavor is sweet and starchy, reminiscent of some apples or raw green beans, and it is usually eaten raw, sometimes with salt, lemon, or lime juice, and chili powder.

Jicama can be eaten raw and is an interesting addition to salads, salsas, and stir-fries. It can be cut into thin wedges and dipped in salsa. In Mexico, it is popular in salads, fresh fruit combinations, fruit bars, soups, and other cooked dishes.

Raw jicama tastes similar to a pear or apple. It also does not discolor when exposed to the open air for awhile. Because of this, raw jicama is often used as an accompaniment to raw vegetable platters. It is also cooked in soups and stir-fried dishes. Jicama is often paired with chili powder, cilantro, ginger, lemon, lime, orange, red onion, salsa, sesame oil, grilled fish, and soy sauce.