Watermelons are a cooling, delicious treat in hot weather. It has only half as much sugar as an apple does, yet tastes sweeter because it is mostly water, making it a refreshing treat and a somewhat portable source of hydration. It provides vitamin A, vitamin C, potassium, and some B vitamins. Here are nutrition benefits of watermelons.

Watermelon fruit is 91% water, contains 6% sugar, and is low in fat. Vitamin C is present in appreciable amounts at 10% of the daily value. Watermelon pulp contains carotenoids, including lycopene. The amino acid citrulline is produced in watermelon rind. 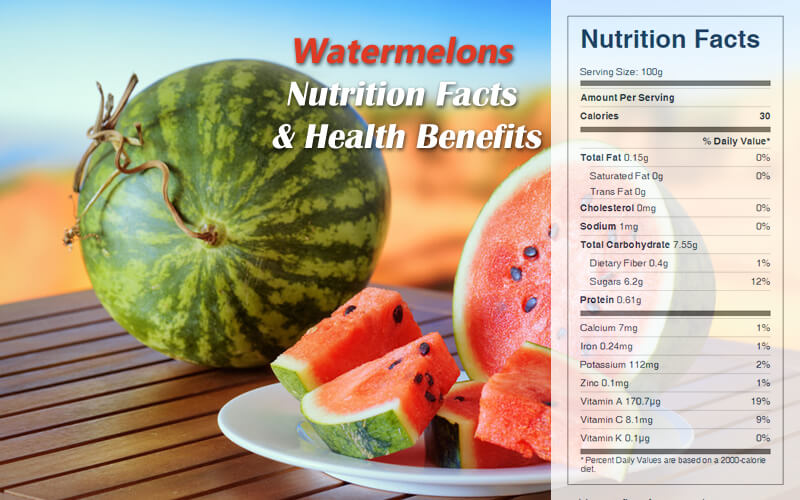 Watermelon is a good source of beta-carotene, vitamin C, potassium, silicon, and numerous bioactive compounds. It also contains lycopene, which is being investigated as a cancer preventative, and glutathione, which guards against cataract formation. We consider watermelon a functional food.

Watermelon has antibacterial, antioxidant, anticoagulant, diuretic, and laxative properties. It lubricates the intestines, has an affinity for the bladder, kidney, stomach, and heart, and is considered a rejuvenating tonic for the blood. Watermelon can help lift the spirits from depression and has been used in treatments for halitosis, hangovers, mouth sores, sore throats, and urethral pain.

Watermelons come in a variety of colors; the diversity is due to the presence of carotenoids, lycopene, and beta-carotene. These bioactive compounds support the immune system through their strong antioxidant ability. A watermelon contains even higher levels of bioavailable lycopene than a tomato! Consuming a lycopene-rich diet can help to improve the detoxification of free radicals that affect our health at a cellular level, damaging our cells and DNA. You can estimate the amount of lycopene in watermelon by the color and the degree of ripening: orange and yellow-fleshed watermelons contain less lycopene than red watermelons, especially when they are fully ripened.

The inner, pale green rind of watermelon contains chlorophyll and can be eaten along with the pink meat. The fruit’s black seeds contain curcurbocitrin, which dilates the capillaries and is a traditional remedy for strengthening the kidneys.

Watermelon also contains a unique bioactive component called citrulline. Watermelon rinds are a significant source of citrulline, a nonessential amino acid involved in the synthesis of arginine, which helps lower blood pressure by relaxing blood vessels. Arginine is critical for various immune responses in both animals and humans. Studies have shown decreases in TNF-alpha and IL-1 beta, which are proinflammatory, and increases in IL-10, which is antiinflammatory. And serum C-reactive protein, which is a general marker of systemic inflammation, is significantly reduced after the consumption of watermelon.

Watermelon—or a tea made by simmering its seeds in water for 30 minutes—has long been recommended in traditional medicine as a remedy for kidney and bladder problems.

All forms of watermelon are also mildly stimulating to the kidneys and are gently laxative, making them useful for those with gout or constipation.

Like grapes, watermelon of all kinds should be eaten on its own, or at least at the start of a meal, since it ferments rapidly in the stomach.

In general, watermelon with a deep color will have more carotenoids, but a deep green exterior does not always guarantee a deep red interior.

When on the vine, the watermelon develops a white spot where it touches the ground; when this white spot turns yellow or cream colored, it indicates ripeness. Avoid watermelon with a green or white belly. A ripe watermelon will also be heavy for its size, have a sweet fragrance, have skin that can be scraped off easily with a fingernail, and make a dull, hollow sound when thumped.

When buying a cut watermelon, check the color of the flesh and go for the dark red. When buying watermelon whole, choose one with a shiny, rich green skin and without bruises, dents, or blemishes.

Watermelon is best enjoyed on its own, but you can add it to other melons in a fruit salad, juice it, or freeze the puree for a cool watermelon sorbet. For a truly invigorating watermelon tonic that will help build the blood and strengthen the glands, try juicing the seeds, rind, and pink meat all together.