Millets are a group of highly variable small-seeded grasses, widely grown around the world as cereal crops or grains for fodder and human food. Here are the nutritional benefits of millet. 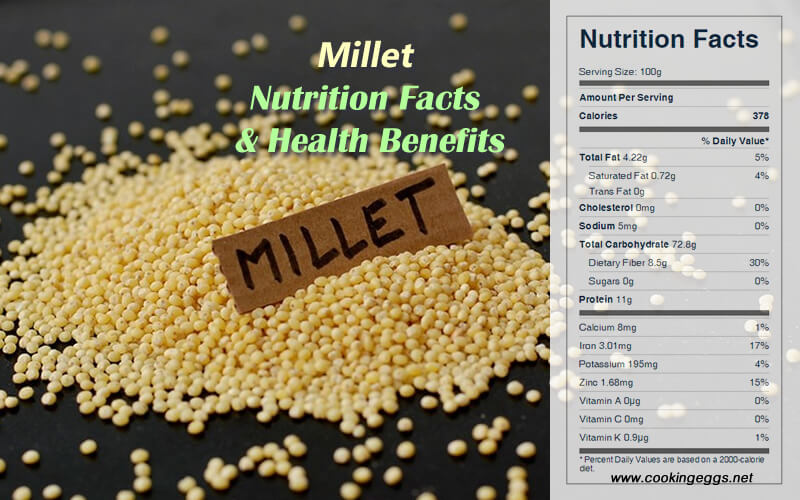 Millet is a staple food in its native Northern Africa and Asia.Millet is high in protein, iron, and silicon. It is easily digested and is very alkaline, unlike most other grains, which are more acid-producing. Millet is considered beneficial for the stomach and spleen. It helps balance blood sugar levels and helps overcome Candida infections.

Other millets sometimes used for food include foxtail millet, pearl millet, and finger millet. Millets are gluten-free grains. Although they are not very closely related to wheat, they have a similar protein content. Like many other grains, millets are a good source of B vitamins, including niacin, B6, and folic acid, as well as the minerals calcium, iron, potassium, magnesium, phosphorus, manganese, and zinc.

Millet is the only grain that has a complete protein. It is also the only alkaline grain, making it particularly suitable for invalids and growing children.

It is also rich in silicon, a structural part of collagen. Silicon is vital for the health of hair, skin, teeth, eyes, and nails. A lack of it can result in sagging connective tissue. Clogged arteries have much lower levels of silicon than disease-free arteries, so it seems to benefit arterial health.

In recent studies, a protein extract from a Korean foxtail millet appeared to effectively increase the amount of adiponectin, a protein hormone that modulates a number of metabolic processes, including glucose regulation and fatty acid catabolism. Mice that were fed a millet extract had higher levels of high-density lipoprotein (HDL), or “good” cholesterol, and lower levels of blood glucose than those that were not. While this research is very preliminary, and the millet extract was highly concentrated, it raises the possibility that millet may have a role to play in fighting insulin resistance, type 2 diabetes, and cardiovascular disease.

People affected by gluten-related disorders, such as coeliac disease, non-celiac gluten sensitivity, and wheat allergy sufferers, who need a gluten-free diet, can replace gluten-containing cereals in their diets with millet.

Note: While millet does not contain gluten, its grains and flour may be contaminated with gluten-containing cereals.