The grapefruit fruit is sour and semi-sweet. The interior flesh varies in color from pale yellow to dark pink. Grapefruit is known to interact with many medications, but grapefruit really can help with weight loss! Here are the nutrition facts and health benefits of grapefruit. 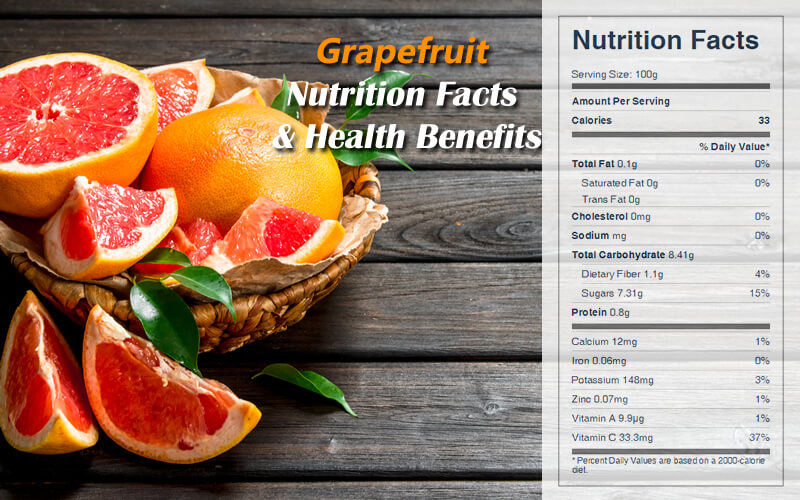 Raw grapefruit is 90% water, 8% carbohydrates, 1% protein, and negligible fat. It is a rich source of vitamin C.

Grapefruit shares with other citrus fruits a high level of vitamin C and plenty of potassium. It’s also well supplied with pectin—a substance recommended for those suffering from circulatory or digestive problems.

Grapefruit has high concentrations of bioflavonoids. They seem to have the ability to protect the integrity of the blood vessels, particularly the tiny capillaries, and to act against inflammation.

Both pectin and bioflavonoids are found in the white pith of grapefruit and in the membranes dividing the sections, so eat the whole fruit rather than just the juice to ensure maximum benefit.

It may surprise many people, but grapefruit really can help with weight loss! In a small test involving 100 obese people, those who ate half a fresh grapefruit each day lost more weight than the control group that did not.

Although these studies were small and more research needs to be done to determine why and how grapefruit works, the results could be significant for the treatment and prevention of type 2 diabetes. It appears that the effect is partly due to grapefruit’s ability to lower glucose levels. Eating grapefruit also appeared to help patients with metabolic syndrome, reducing their insulin resistance.

Grapefruit is rich in flavonoids that are helpful in lowering the risk of cancer and cardiovascular disease. Because it is not very sweet, it is a good fruit for those who wish to limit carbohydrates. Grapefruit seeds have also been shown to have an antibacterial effect.

As is often the case, the more vibrantly colored fruit tends to have more antioxidants and other life-saving compounds. That means that pink-and red-fleshed varieties of grapefruit pack more nutrient punch than white grapefruit, including the antioxidant lycopene, which may help prevent age-related blindness.

Grapefruit and grapefruit juice have been found to interact with numerous drugs and in many cases, to result in adverse direct or side effects.

Furanocoumarins occur in both grapefruit flesh and peel. They inhibit the CYP3A4 enzyme, including the P450 enzyme family responsible for metabolizing 90% of drugs. The action of the CYP3A4 enzyme itself is to metabolize many medications. If the drug’s breakdown for removal is lessened, then the level of the drug in the blood may become too high or stay too long, leading to adverse effects. On the other hand, some drugs must be broken down to become active, and inhibiting CYP3A4 may lead to reduced drug effects.

Grapefruit can block the absorption of drugs in the intestine. If the drug is not absorbed, then not enough of it is in the blood to have a therapeutic effect.

There are several drugs that are “potentiated” by taking them with grapefruit or grapefruit juice, meaning their effect is made stronger, and others whose effectiveness is reduced when taken with grapefruit. The categories of medications that may interact with grapefruit include antihistamines, antibiotics, benzodiazepines, calciumchannel blockers, cholesterol-lowering drugs, and immune system suppressants.

If you are taking any of these medications, check with your doctor or pharmacist to see if you should avoid grapefruit.