The feijoa, also called pineapple guava or guavasteen, it is a subtropical fruit that grows up to about 3 inches in length. Feijoa has a fairly complex flavor that is often compared to that of pineapple but also contains hints of strawberry, guava, quince, and mint.

Feijoa sellowiana is a species of flowering plant in the Myrtaceae family. The Pineapple guava is native to South America, specifically extreme southernmost Brazil, Argentina, and the mountainous regions of Uruguay. It is now cultivated in South America, New Zealand, Australia, Asia, Africa, and the United States. It has been nicknamed pineapple guava, Brazilian guava, and fig guava. It‘s called guavasteen in Hawaii.

The fruit of the feijoa tree is high in vitamin C, fiber, potassium, phosphorus, magnesium, sugar, and calcium. It also contains high amounts of bioflavonoids and polyphenols such as catechin, leucoanthocyanins, flavonols, proanthocyanidins, and naphthoquinones. 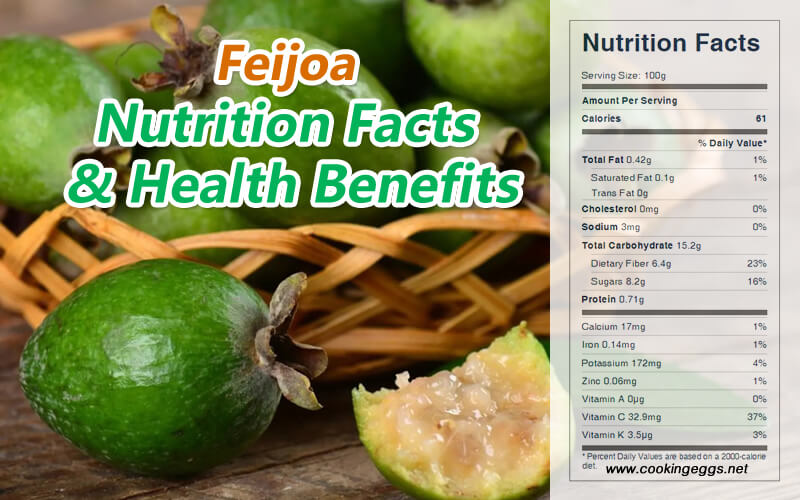 Feijoa is rich in dietary fiber, which is very good for our hearts. A high-fiber diet can help reduce blood cholesterol levels such as LDL cholesterol, which may reduce the risk of cardiovascular disease, such as heart attack and heart stroke.

The juice extracted from feijoa has anti-inflammatory properties. It contains compounds such as quercetin, eriocitrin, syringic acid, ellagic acid, pyrocatechol, gallic acid, catechin, rutin, and eriodictyol. The research shows that there is meaningful anti-inflammatory activity in fruit juice that helps to inhibit neutrophil basal activity.

Feijoa fruit is high in vitamin C and provides about 32.9 mg per 100 g fruit. Vitamin C is important for the proper functioning of the immune system. As an antioxidant, it reacts with compounds like histamines and peroxides to reduce inflammatory symptoms. Vitamin C functions as a cofactor in many enzymatic reactions in the body that mediate a variety of essential biological functions, including wound healing and collagen synthesis.

Fiber-rich foods can help reduce constipation by adding bulk to the stool. Insoluble fibers help to increase bulk and soften the stool so it passes quickly through the large intestine. This feature makes it potentially beneficial in the prevention of digestive diseases, including colon cancer, diverticulosis, and hemorrhoids. Insoluble fibers may also assist in weight management in that they speed the transit time of food in the intestines. For this reason, they may also be protective against gastrointestinal diseases.

Feijoa is highly rich in dietary fiber, which is very beneficial to preventing diabetes. Fiber promotes the production of insulin in our bodies, which slows sugar absorption in the bloodstream, allowing sugar levels to be controlled and the risk of diabetes to be reduced. Feijoa has a very low glycemic index, which means that it will not raise our blood sugar levels, so those with diabetes can consume it without worry.