Eggplants are part of the berry family. The purple skin of the eggplant comes from anthocyanins, and they possess many of the key health-promoting benefits we see in berries, here are nutrition facts & health benefits of eggplant.

Eggplant is a very good source of dietary fiber, potassium, manganese, copper, and thiamine (vitamin B1). It is also a good source of vitamin B6, folate, magnesium, and niacin.

Raw eggplant is 92% water, 6% carbohydrates, 1% protein, and has negligible fat. Minor changes in nutrient composition occur with season, environment of cultivation, and genotype. 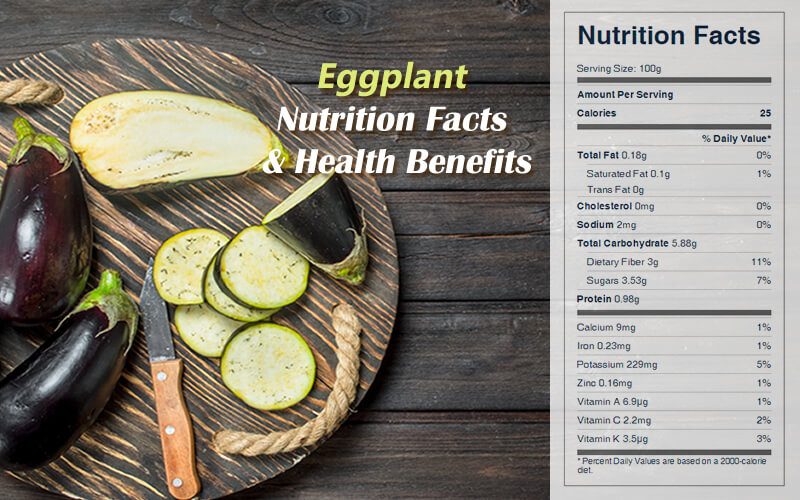 The most common eggplant in North American is purple. That rich purple skin is the source of an interesting anthocyanin called nasunin. Nasunin has antioxidant properties, is a scavenger of free radicals, and has been shown in the laboratory to protect cell membranes, including brain cells, from oxidative damage. Eggplants rank number 10 in antioxidant capacity among 120 vegetables!

Let’s break down the eggplant’s assortment of bioactive compounds, which includes phenolics, carotenoids, and alkaloids. Hydroxycinnamic acids (HCA) and their derivatives are the most predominant class of phenolic acid conjugates in eggplant and contribute to many benefits for human health: high antioxidant capacity and anti-inflammatory, anticancer, anti-obesity, and antidiabetic properties. Interestingly, a study found that chlorogenic acid polyphenols were retained in the grilled eggplant, suggesting chlorogenic acid being thermally stable.

Another unique molecule in eggplant is inositol. Inositol is a component of cell membranes and plays an important role in various cellular functions. Inositol has been found to have a positive effect on the way your body handles blood sugar by improving insulin sensitivity. It also functions as a secondary messenger regulating the activities of several hormones.

Another eggplant nutrient, chlorogenic acid, is an antioxidant and works to slow the release of glucose into the bloodstream after eating.

Eggplant should be glossy, richly colored, and heavy. Both large and small eggplants can be dry or overly seedy inside.

Eggplant becomes bitter when stored in the refrigerator, but it does not keep well above about 50°F. Raw eggplant can have a bitter taste with an astringent quality, but it becomes tender when cooked and develops a rich, complex flavor. Rinsing, draining, and salting the sliced fruit before cooking may remove the bitterness. The best-kept secret in reducing bitterness in eggplants is to slice and salt the eggplant to draw out some of the glycoalkaloids.

Although eggplant itself is low in fat, it is famous for soaking up cooking oil, so if you wish to limit fat intake, it is best to cook eggplant by baking, roasting, or cooking in soup.

1. Case reports of itchy skin or mouth, mild headache, and stomach upset after handling or eating eggplant have been reported anecdotally and published in medical journals. Contact dermatitis from eggplant leaves and allergy to eggplant flower pollen have also been reported.

2. Individuals who are atopic are more likely to have a reaction to eggplant, which may be because eggplant is high in histamines. A few proteins and at least one secondary metabolite have been identified as potential allergens. Cooking eggplant thoroughly seems to preclude reactions in some individuals, but at least one of the allergenic proteins survives the cooking process.

Eggplant is among a small number of foods that contain measurable amounts of oxalates, so over-consumption can cause problems for those with kidney disease, gout, vulvar pain, rheumatoid arthritis, or other conditions that may require a low-oxalate diet.