Cabbage is the flagship of the cruciferous vegetables. It’s one of the best non-fruit sources of vitamin C, is also rich in folate and fiber, and it’s remarkably low in calories. Here are the nutritional benefits of cabbage. 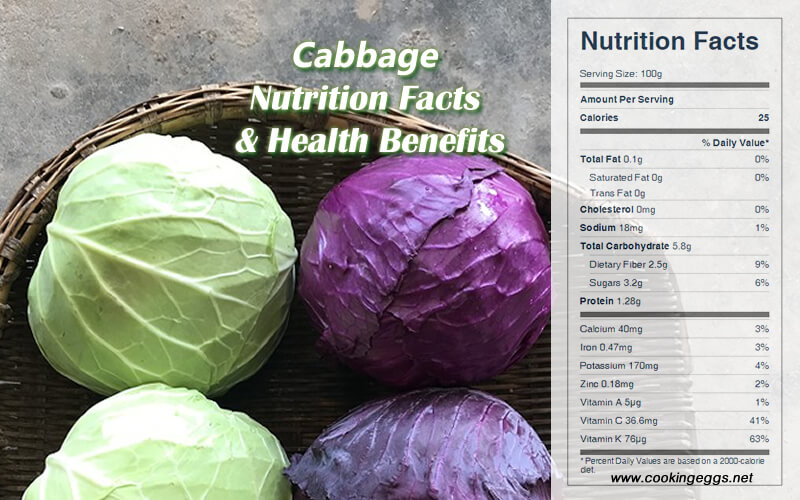 The nutritional value of cabbage

Cabbage is a member of the genus Brassica and the mustard family, Brassicaceae. Several other cruciferous vegetables are cultivars of B. oleracea, including broccoli, collard greens, Brussels sprouts, kohlrabi, and sprouting broccoli. This original species evolved over thousands of years into those seen today, as selection resulted in cultivars having different characteristics, while the color spectrum includes white and a range of greens and purples, such as large heads for cabbage, large leaves for kale, and thick stems with flower buds for broccoli. By the Middle Ages, cabbage had become a prominent part of European cuisine.

In addition to its usual purpose as an edible vegetable, cabbage has been historically used in herbalism. The Ancient Greeks recommended consuming the vegetable as a laxative and used cabbage juice as an antidote for mushroom poisoning, for eye salves, and for liniments for bruises. The ancient Romans described both the culinary and medicinal properties of the vegetable. Other medicinal uses recorded in European folk medicine include treatments for rheumatism, sore throats, hoarseness, colic, and melancholy. Both mashed cabbage and cabbage juice have been used in poultices to remove boils and treat warts, pneumonia, appendicitis, and ulcers.

Centuries of use have also given the cabbage a reputation as being protective against stress, infection, and cardiac problems, while as a member of the crucifer family, it is known to contain many anti-cancer compounds. In population studies, people eating the most cabbage were the least likely to develop cancer.

Cabbage has been the subject of an impressive amount of medical research. This is not surprising: its healing powers, which have been long attested in traditional medicine, cover an amazing range of ailments. Cabbage contains indoles, which help prevent breast cancer by inhibiting estrogens from stimulating tumor growth; monoterpenes, which are antioxidants that give protection against heart disease and cancer; and various other compounds shown to have anticancer properties. Basic research on cabbage phytochemicals is ongoing to discern if certain cabbage compounds may affect health or have the potential for anti-disease effects, such as sulforaphane and other glucosinolates.

As early as 1949, researchers were studying the effect of cabbage juice on gastric ulcers. It appeared that the juice helped the ulcers heal faster. Since we now know that most ulcers are caused by a bacterium, further study is needed to see why the cabbage juice appeared to be so effective, and whether cabbage juice alone possesses the healing property.

Cabbage has long been recognized for its anti-inflammatory properties and its positive effect on overall health. This vegetable has alterative, anti-inflammatory, antiseptic, and diuretic properties. Chopped cabbage leaves are used as a topical treatment for painful joints, bug bites or stings, burns, eczema, rashes, varicose veins, and wounds, including gangrene. In fact, they are a soothing poultice for just about any skin irritation.

Cabbage contains healing mucilaginous substances similar to those produced by the mucous membrane of the gut and stomach for their own protection. This confirms the effectiveness of the traditional raw cabbage juice cure for ulcers.

Cabbage is also loaded with sulfur compounds that give it a tonic and disinfectant action in respiratory infections.

Anyone who is anemic should eat cabbage for its iron and chlorophyll. This is the green “blood” of plants, which is chemically similar to the hemoglobin in human blood.

Perhaps more excitingly, guinea pigs fed diced raw cabbage before whole body irradiation survived, whereas those who were not were all killed within 15 days. So maybe all those working with VDU screens, or facing radiation treatment or even diagnostic X-rays, should eat plenty of raw cabbage.

Most of these therapeutic effects have been observed with raw cabbage, and no doubt would also be found in sauerkraut. Traditional boiling in water not only means major nutrient losses into the water but also the disappearance or deactivation of many healing compounds. So cook cabbage in its own juices for as short a time as possible.

Excessive consumption of cabbage may lead to increased intestinal gas which causes bloating and flatulence due to the trisaccharide raffinose, which the human small intestine cannot digest but is digested by bacteria in the large intestine.

Cabbage and other cruciferous vegetables contain small amounts of thiocyanate. It is a compound associated with goiter formation, which can interfere with normal thyroid function when iodine levels are low. Regular consumption of sea vegetables will prevent iodine deficiencies.