The carob’s scientific name is Ceratonia siliqua, it is a leguminous evergreen tree of the family Leguminosae native to the Mediterranean basin and southwestern Asia, where it has been cultivated for its edible pods.

Both carob pods and seeds are edible, they are grown mainly for livestock feed, but the finely ground pods and seeds make a sweet, nutritious human food. The beans and kernels of carob are useful for a variety of purposes, including food, fodder, and as a source of industrial products such as gums, sugar, and alcohol.

Fresh carob beans are long, flattened pods that mature from a bright green to a deep brown. Unripe pods are soft, fleshy, and bright green and have a similar appearance to pea pods. Ripe pods have a sweet taste due to their high isobutyric acid content, which releases an aroma reminiscent of Limburger cheese. The beans are used for a variety of things, such as a substitute for chocolate as well as a stabilizer in food products; they are even used to cure tobacco. The bean, often referred to as a fruit, is also called locust bean or St. John’s bread. 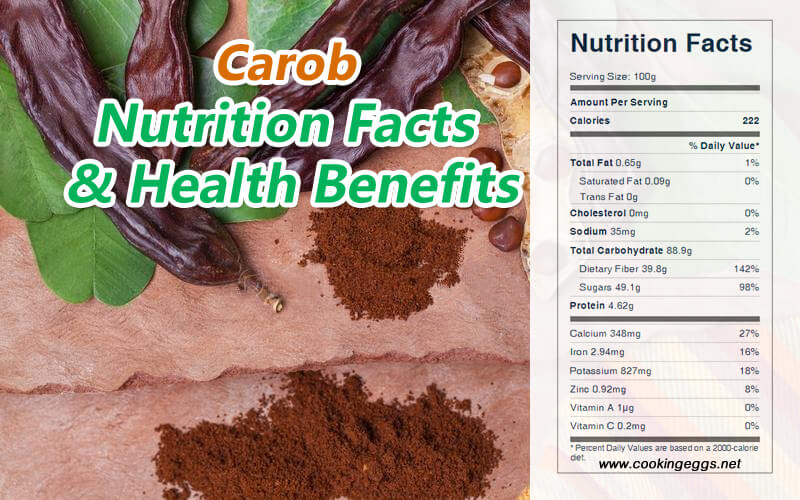 Carob beans are high in fiber and protein, as well as vitamins A and B. They contain four times as much potassium as bananas. Fresh carob beans are lower in fat and higher in sugars than chocolate, have no caffeine, and are non-toxic to animals. The pulp of a carob pod is about 48–56% sugar and 18% cellulose and hemicellulose. The embryo is rich in proteins. The testa, or seed coat, contains cellulose, lignins, and tannins. Moreover, carob pods are virtually fat-free, and the pod has vitamins A and B and several important minerals, such as potassium, phosphorus, calcium, and magnesium as major minerals and iron, manganese, zinc, and cuprum as trace minerals.

Carob pods have antioxidant properties and are recommended for use in functional foods and as a food ingredient for humans and animals. The carob pod’s high polyphenolic content and its strong antioxidant activity make this nutrient an interesting potential candidate for health foods. The carob pod crude polyphenol extract has a strong antioxidant activity. The study shows that polyphenols extracted from pods of carob display strong free radical scavenging inhibition against the discoloration of beta-carotene.

Carob has low sugar and a fraction of fat content; it assists in the prevention of spikes in blood sugar and is considered a safe dietary choice for diabetic patients. It is a better substitute for chocolate and also provides fiber and protein, which we lack. Carob bean gum can also be made into sugar- and starch-free flour for diabetics.

Carob seed gum is also used to treat infants with diarrhea and recurrent regurgitation. Another medicinal value of carob bean gum is its ability to reduce gastrointestinal conditions, especially diarrhea in infants. It normalized defecation and body temperature and lowered vomiting. Utilization of carob gum as an adjunct to oral rehydrating solutions showed promising results for the treatment of infantile diarrhea. Carob gum is able to act as a thickener to absorb water and help bind together watery stools.

Infants with recurrent reflux and regurgitation disease benefit from a carob bean gum-thickened formula. Recurrent reflux and regurgitation in infants can inflame and damage the esophagus, thus affecting the nutritional status and resulting in poor growth. Carob bean dietary fiber may make food more viscous in the stomach and thus interfere with acid reflux into the esophagus.

Carob is a medicinal plant that is used in traditional medicine for treating gastro-intestinal disorders. The phytochemical constituents and pharmacological activities of carob on the gastro-intestinal tract are investigated. Carob contains a high content of carbohydrates, minerals, dietary fiber, flavonoids, and polyphenols and a low content of lipids and proteins. The plant has antimicrobial, anti-inflammatory, antioxidant, anti-diarrheic, anti-constipation, anti-ulcer, and anti-absorptive of glucose activities in the gastrointestinal tract. On the basis of chemical and pharmacological features, it is concluded that this species has therapeutic and preventive properties in the digestive tract.

Carob has fiber which inhibits the secretion of postprandial ghrelin. It increases the dietary fiber in a food product without increasing the calories, and because of this, it is useful in developing reduced-calorie foods. It is used as a fat substitute in mayonnaise and many dairy products and is considered an excellent alternative to gluten because it is non-allergenic and safe. The presence of this substance in foods also increases the swelling of the food once in the stomach, which encourages a feeling of fullness. It is considered to be a natural appetite suppressant. Carob can lower the chances of overconsumption and support weight-loss activity.